Home  /  In the News   /  Texas Silver-Haired Legislature Working for Seniors

In the News, Press Release

The 18th Texas Silver-Haired Legislature (TSHL) convened on the floor of the House of Representatives in Austin, Texas, July 14- 18 this summer. Eighty delegates from 28 districts in Texas were sworn in for a two-year term by the Honorable Donna Howard, Texas Rep. District 48.

This five-day meeting was the first of three TSHL sessions to be held over the next 12 months. The delegates will research senior issues in Texas, prepare resolutions for proposed legislation, pass them through committee, and vote on them in full chamber next May. Approved resolutions will be included in a 2020 TSHL Legislative Report that will be delivered to all legislators, as well as to the Governor and Lt. Governor, in advance of the 2021 state session.

The Texas Silver-Haired Legislature is a non-partisan body created by the 69th Texas Legislature with the adoption of SCR 37, on April 3, 1985. Since its inception, some 684 seniors have been elected to serve in TSHL. The vision of TSHL is that “the applied wisdom, energy, and experience of aging will improve the lives of all Texans through education, knowledge, and involvement in legislation and governmental affairs. 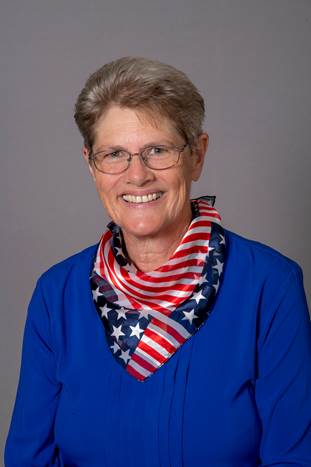 Local resident Irene Andrews, representing Central Texas which includes the seven counties of Bell, Coryell, Hamilton, Lampasas, Milam, Mills and San Saba, was among the sworn delegates and will serve her second term as elected chair of the sub-committee on Retirement and Aging. In her first term, she is proud to have co-signed a resolution that asked the Legislature to take action to make the Teacher Retirement System Pension Plan actuarily sound. She helped inform her fellow TSHL members on this issue, explaining that TRS impacts thousands of seniors in this state who are retired teachers, such as herself. It became one of the top ten resolutions that TSHL voted on, approved and published in their Legislative Report.

Andrews recalled visiting the Capitol many times, both before and during the recent 2019 State Legislative session, meeting with Rep. Brad Buckley and staff members of Senator Dawn Buckingham, to remind them of how critical it was to make TRS actuarily sound. “I am pleased the bill received so much support. Through the efforts of countless volunteers, within TSHL, Teacher Union Organizations and the Texas Retired Teachers Association, what began as a resolution became law.”

At the convention, the Honorable Rhonda M. Rogers, representing the Ark-Tex district, was elected Speaker for the 2019-2021 legislative term. Rogers, a retired military officer and teacher living in Paris, Texas, has served on TSHL since 2015.

Outgoing Speaker, the Honorable Walter Graham, was named Speaker Emeritus during the closing session. Graham represents the West Central Texas District and served as Speaker from 2008-2013 and again from 2017-2019. Rogers praised Graham for his dedication, commitment, and hard work for the senior population of Texas. “Walter Graham has served in virtually every office in the Texas Silver-Haired Legislature during his eight terms. His leadership has resulted in countless bills that have been passed into law and I know that he will continue to serve our senior citizens and this great State as Speaker Emeritus,” she said.

Legislation that the advocacy group has crafted in past sessions includes increasing the financial strength of the Teacher Retirement System pension plan, creating the Silver Alert for missing seniors, increasing the monthly personal needs allowance to $60 for Medicaid nursing home residents, allowing grandparent caregivers to make educational and medical decisions for a grandchild without having custodial rights, and enhancing criminal degree and fines for those who perpetrate internet Fraud against seniors.

“The work we do to advocate for and improve the lives of Seniors in Texas is totally voluntary. We are always looking for people 60 years and older to join the ranks of TSHL. It is an honor to serve and rewarding to see the positive impact we are making for seniors in Texas”, said Andrews.

To get involved with TSHL, contact Irene Andrews at TSHLirene@gmail.com, visit her Facebook page @empower60, or call Kerry Fillip, Director of the Area Agency on Aging of Central Texas at (254) 770-2344 or (855) 937-2372. Additional information is also available on the TSHL website at www.txshl.org.

by Area Agency on Aging of Central Texas
1

Memory lapses may not always be a sign of #dementia. Those with mild cognitive impairment (MCI) do not experience the personality changes of #alzheimers, but they may show memory issues. Read more about MCI from the National Institute on Aging - NIH. nia.nih.gov/health/what-mild-cognitive-impairment ... See MoreSee Less

Are you interested in becoming a certified caregiver? Find the requirements for Texas #caregivers on the myCNAjobs website and search for local classes. mycnajobs.com/caregiver-training/texas/ #caregivertraining #CNA ... See MoreSee Less

If you notice a loved one suddenly acting confused or unbalanced, it could be a mini stroke, or transient ischemic attack (TIA). Learn more about TIA's symptoms from DailyCaring and what to do if you've experienced a #ministroke. dailycaring.com/tia-is-a-warning-sign-of-stroke-and-vascular-dementia #dementia #healthtips ... See MoreSee Less

Lowering blood pressure and cholesterol are necessary for good health, but those can be hard to control. The American Heart Association gives tips for overcoming barriers to #exercise to boost #heart health. heart.org/en/news/2021/06/09/overcoming-midlife-barriers-to-exercise-and-better-health #hearthealth ... See MoreSee Less

This is Mary and she’s the most endearing and funniest person I’ve met in a long time. After she completed sharing her action plan she share with us a little confessionListen to her sweet voice as she told us where she went after our first day of class. It’s ok to have a weak moments. However it’s all about moderation. Enjoy this video. It gets REAL! ... See MoreSee Less